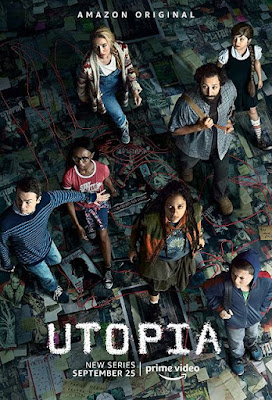 So many people are asked “where is Utopia” in this series. At least one of them should have said Utopia doesn’t exist. It is a false temptation that inevitably leads to totalitarianism. Seriously, “Erewhon” is nowhere spelled backwards (almost). However, in this case, Utopia is a thing and maybe something more. It is the sequel to an underground graphic novel titled Dystopia that many geeky conspiracy theorists believe holds portents of an impending apocalypse. Unfortunately, these motley nerds are more right than wrong in the eight-episode Utopia, created by Gillian “Gone Girl” Flynn (adapting Dennis Kelly’s UK series of the same name), which premieres today on Amazon Prime.

A young couple finds what looks like page proofs of a bizarrely baroque allegorical dystopian comic book. Through a little bit of internet research, they determine it is the mysterious, long-awaited sequel to Dystopia, a cult phenomenon with a rabid fanbase—so it is probably worth something. They decide to auction it off at a local comic convention. Wilson Wilson and his fellow Utopia chatroom friends will have to be there, so they can bid, pooling their resources. It will also be there first opportunity to meet in real life.

The last part will be the part for the fellow fans. There is definitely a budding romantically attraction between the sweet-tempered (but ailing) Becky and the nebbish Ian. Wilson is also duly impressed to discover Samantha’s obsessive interpretations of Dystopia rival his own in their wild paranoia. However, they have yet to discover their fifth member, Grant is actually a tough street kid.

Unfortunately, the get-together takes a dark turn when a creepy duo of killers starts snuffing out everyone at the convention who had contact with the pages of Utopia. Suddenly, the fans are on the run from a shadowy cabal, very much like the one in the pages of Dystopia/Utopia. Things really get surreal when they are forced to make an alliance with an unstable but highly lethal young woman who claims to be Jessica Hyde, the hero of the fateful comics, who has her own reasons for wanting Utopia.

Meanwhile, Bill Gates-like Big Pharma tycoon Dr. Kevin Christie is bedeviled by media speculation his new synthetic meat has caused a deadly viral outbreak among school children. Mild-mannered academic Dr. Michael Stearns suspects it might be the rare bat virus he discovered in Peru. What do these characters have in common? Surely, it is all explained in the pages of Utopia.

So, who’s in the mood for an apocalyptic viral thriller? Obviously, there are plenty parallels between the crisis facing the world in Utopia and the real-life pandemic that is still persistently hanging around. However, the real point of the show is its geeky meta-ness. The in-film reality blends and overlaps with the comic duology’s mythology in ways that are often quite clever. Flynn relentlessly raises the stakes with each episode, which she invariably ends with a wicked cliffhanger.

It is easy to get hooked by Utopia, even though you might not always enjoy watching it. This series and its characters have some serious mean streaks. Frankly, there is more stone-cold cruelty depicted in Utopia than nine out of ten randomly selected slasher horror movies. The violence can be overwhelming and counter-productive. Early in the series, a major character does something so egregious, it is hard to sympathize with them later, even though we are clearly intended to.

Of course, we can tell Christie is a bad guy, because he is played by John Cusack (getting a break from his VOD-thrillers-of-the-week). He is also obviously a Malthusian over-population wacko, who constantly asks: “what have you done to justify your place in this crowded world?” Still, Cusack plays his smarmy smugness in a decidedly sinister manner. Similarly, Christopher Denham is terrific as the child-like assassin, Arby.

On the other side, the Utopia-pack fans give the series some much needed heart, as well as geeky cred. Desmin Borges (Wilson), Dan Byrd (Ian), Ashleigh LaThrop (Becky), Jessica Rothe (Samantha), and Javon “Wanna” Walton (Grant) forge an endearing rapport together as the nerds caught up in the meta-macro-machinations. Rainn Wilson is also believably smart and dumb in very different ways, as the schlubby Dr. Stearns. However, there is something a little off about Sasha Lane’s portrayal of the borderline sociopathic Hyde. It is all fury on the outside, with no fire on the inside. (She’s no “Amazing Amy,” that’s for sure.)

There is a good deal of inventive art and design work in Utopia, starting with those Macguffin comic pages. Flynn and the design team create a unique vibe that is part paranoid conspiracy thriller and part dark fantasy. Sometimes, the nightmarishly unreal events feel weirdly too real, but it is the off-hand brutality that taxes viewer enthusiasm. Recommended with reservations for audiences self-identifying with nerd culture, Utopia starts streaming today (9/25) on Amazon Prime.
Posted by J.B. at 6:00 AM