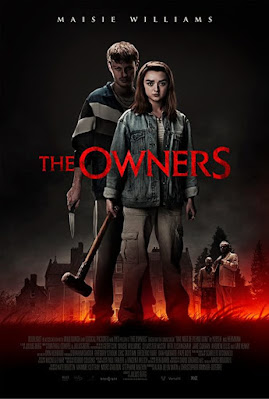 Kids need to learn to better respect property rights. The actions depicted in this film probably aren’t the best way to go about it. Still, if teen viewers take an object lesson from the woes inflicted on four ill-informed home invaders than maybe some good will come of it. Regardless, it is safe to say crime does not pay, at least not the larcenous kind, in Julius Berg’s The Owners (Anglicized and adapted from Hermann “Jericho” Huppen’s graphic novel, Une Nuit de Pleine Lune), which opens tomorrow on demand and at select theaters.

Mary’s boyfriend Nathan was always a big-talking loser, but he has become progressively worse since falling under the sway of Gaz, a predatory drifter. When Nathan’s childhood pal Terry off-handedly mentions the cash kindly Dr. Huggins supposedly has stashed in a safe at his country home, Gaz hatches a half-baked plan to break-in and grab it. Mary is appalled when she catches them in the act, but Nathan manipulates her into going along. Unfortunately, there are two problems with Terry’s assumptions. There probably isn’t cash in that safe, but rather something a bit more sinister, and Huggins and his wife (and longtime nurse) Ellen are not so kindly (that really shouldn’t be giving away much, since the film is titled The Owners, rather than The Intruders).

Buckle up, this will get brutal, but don’t worry, you won’t worry about any of these awful people. Okay, maybe we feel a small degree of sympathy for Mary, because she usually tries to do the right thing, but she still has massively bad judgment. Regardless, you would think a man of advanced years like Dr. Huggins would be somewhat more challenged by four able-bodied twenty-nothings, even though he has all the brains on his side.

What generation you identify with will determine who you think is the proper star of this film. Maisie Williams (from Game of Thrones) plays Mary. While she handles the frightened prey business well enough, The Owners is not a great showcase or star vehicle for her. Sylvester McCoy (the seventh Doctor Who) really is terrific as the cunning psychopath masquerading in country doctor-sheep’s clothing. Then there is Rita Tushingham portraying his wife Ellen. Seriously, everyone who remembers her when she was a sensation in British New Wave films like A Taste of Honey and The Trap was really thinking: someday she will reach her full potential playing a half-senile psychopathic killer.

By far, McCoy fares the best out the entire ensemble, but Jake Curran also has his creepy moments as the snarling Gaz. In fact, his great on-screen villainy suggests McCoy might be able to succeed the late Sir Christopher Lee and Michael Gough when future senior Hammer-style horror heavies are needed. On the other hand, it clearly just isn’t Tushingham’s thing.

Even many jaded horror fans will agree The Owners is harsher than it needed to be. On the other hand, it is cool to see a new side of McCoy. Guardedly recommended for committed horror enthusiasts, The Owners releases tomorrow (9/4) in theaters and via VOD platforms.
Posted by J.B. at 3:00 AM